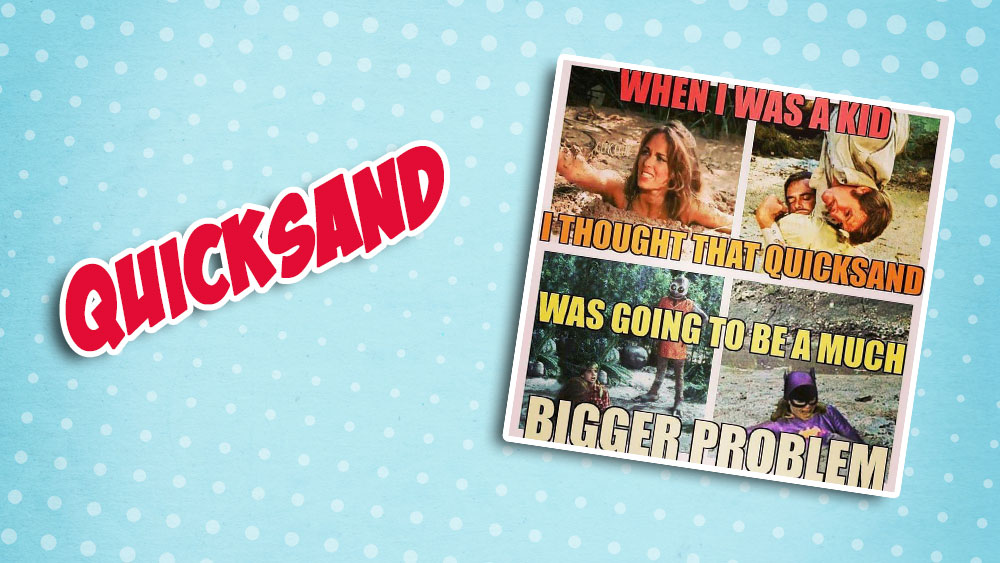 Have you ever noticed that some people seem to stay perpetually stuck in their problems? No matter how much help they get, how hard they try, or how long they struggle…they seem to stay stuck?

No matter how many times you try to help someone like this through their hangups, disappointments and failures…nothing ever seems to change?
I’ve witnessed this in many lives…some that I’ve known for many years.

When I was a kid, I learned about this great danger of the world. Many of my favorite childhood TV and movie heroes and heroines faced it at one time or another. You could be walking along a normal looking dirt path and out of nowhere…you could disappear in a pit of earth that sucked you down to it’s depths. The more you struggled, the more you would sink. Unless, of course, you had a friend that could throw you a rope, a tree branch, or a long (and preferably nonpoisonous) snake to pull yourself out with.

I came across a meme that made me laugh as soon as I saw it. “When I was a kid, I thought quicksand was going to be a much bigger problem.”

As it appears, quicksand is not near as prevalent as some of my childhood shows made it out to be…and that is a good thing.

As an adult, though, I’ve found that there is a form of quicksand that does suck people in. They more they struggle, the more they sink.

Drama always surrounds them and they never seem to find that epiphany that unlocks the door to the prison that they have made for themselves.

There really can be a number of different causes for this prison. Great hurt, the wrong friends, poor decisions are all possibilities. But I’ve found the greatest cause of being “stuck” is simply having the wrong goals.

A couple who is struggling stays…well…struggling because the things they are trying to bring health and happiness to their relationship are the wrong things. They try to find a hobby together, find a couples retreat that makes them fall in love again, or they simply keep trying to “fix” the other person…and they stay stuck instead of seeking to be changed and renewed by the One who has the keys to life.

The person who is constantly lonely throws themselves at one bad date after another, confident that the next one will be “the one” to make them feel whole and happy no matter what they have to sacrifice to keep them in their life instead of finding peace and contentment in the One who wants to lead them to a godly husband or wife.

The person who can’t make it from paycheck to paycheck and smokes a pack of cigarettes a day and drinks a six pack of beer a day just to cope with the need for a little more money to get out of this hole instead of submitting their expectations, hopes, and dreams in where God wants them to be.

It’s all quicksand, because they look like good, plausible answers to their problems, but once you step into them, you begin to sink. You try harder, but you sink faster.

When we have the wrong goals, we never get to the place we ultimately want to go. We can’t deal with our heartaches, our hangups, or our own drama.

We interpret the goal of peace as the pursuit of happiness and we fail to be at peace.

“But seek first the kingdom of God and his righteousness, and all these things will be added to you.” Matthew 6:33 (ESV)

Seeking God has always been the answer to every problem, not because he miraculously makes your problems go away, but because he helps you avoid them all together.

When you are stuck, He gives you the wisdom, strength and courage to dig your way out.

Instead of seeking a quick fix, or some grand pursuit of happiness, you find true peace that is far greater.

Ultimately, all of the things other than God look stable, but quickly become a rapidly sinking pit of despair.

In what ways can you begin seeking God and opening yourself up to His leading, today?