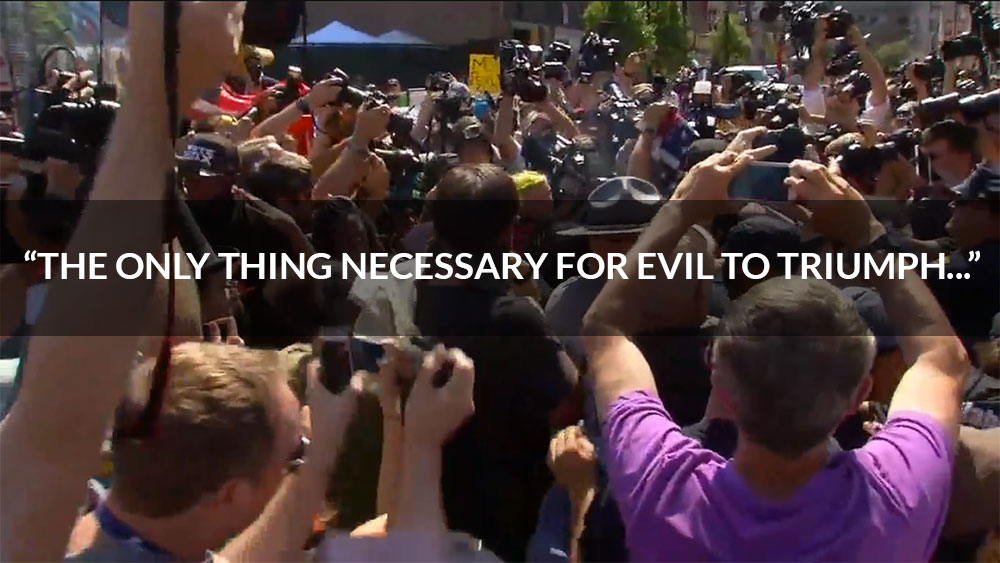 “The only thing necessary for evil to triumph…”

If you were able, this week has been a good week to avoid the news. The RNC National Convention has been in full swing and Donald Trump has been given the RNC nomination as the official Repbulican Presidential Candidate.

Outside the convention has been a completely different show of it’s own marked with protests, angry opponents to Mr. Trump, and different fringe political groups trying to argue for their own right to dictate the laws and behavior of this nation.

Through the fog of a very busy week, 1 news story in particular made my stomach churn. You can see it here…

2 reprehensible groups stood out to me as I watched yet another group try to bring change to America by lighting a flag on fire. The first group should be pretty obvious…the Revolution Communist Party. They were burning the flag and protesting all things America while their political philosophy is responsible for some of the worst atrocities in the history of the world.
They, in and of themselves, are a very disturbed group of people.

The second group, though.

I couldn’t help but start to feel sick to my stomach as the scores of cameras scurried like mice fighting over the last morsel of old moldy cheese to get their “money shot” for their news outlet.
You could almost feel the glee as they knew they were at the right time at the right place to “witness” this event.

And I was reminded of Edmund Burke’s, the Irish philosopher’s, words…

“The only thing necessary for the triumph of evil is for good men to do nothing.”
― Edmund Burke

As I watched a disturbed group of people trying to (metaphorically speaking) burn this nation to the ground, so many just stood by with the singular thought of, “what can I gain from this?”

Today, the philiosophy of our emerging culture is this…
I’ll let you do whatever you want as long as it doesn’t infringe on me…
if you will let me do whatever I want and I won’t infringe on you.
A new implementation of “Don’t Ask, Don’t Tell” which sought to ignore the reality of something, opting instead, for blissful ignorance.

As believers, it is tempting to respond in just this way.
We can easily assess our words and actions based on “what benefits ME the most”.
Jesus constantly acted in ways that benefited others, that called out injustice, and that rescued the oppressed.

As we’ve been walking through Philippians, Paul has been generous in his praise of a church that had chosen to be salt and light in the world by choosing to act in ways that addressed injustice and helped others.

As the church, I hope you will join me as we seek to not just sit back and watch injustice in the world, but that we would stand as Jesus and Paul did.

“The only thing necessary for good to triumph is for those who know the truth to do something.”
-Mark Love